Cosydrive have released their new single ‘RB7′ through Hairy Recordings, and to celebrate Hairy put on a four-band-extravaganza at Hackney’s Paper Dress Vintage. We were there, and it threw up some sonic surprises.

What we found was this..

Live, the band has a taste for the strange, and the show is equal part performance and music. Cosydrive‘s sound touches on Ariel Pink, and their love for left-field pop doesn’t get lost within the mesmerising stage show.

Opening their set with the colossal debut single ‘Young Gun‘ released in May of this year, London’s Show Boy set the tone for a set full of Prince-esque early 70’s glam-pop anthems. The band’s most recent single ‘Empress‘ fits in later in the set, showing how far the sound has expanded and has progressed through such a short space of time.

Shirtless by the end of the set, singer Jovis wanders through the crowd as band and audience fuse into one. Fresh from supporting one of London’s best new bands HMLTD, at the 1,100 cap venue Electric Ballroom, Show Boy now have a taste for the big stages to suit their huge choruses, and on the night it showed. See our ‘5 minutes with… SHOW BOY’ here.

Minimal electronic four-piece 60s Space Engine, played an otherworldly electronic set weaving in and out euphoria. Dreamlike guitar and shimmering synths were held aloft by a hard back line of tight drumming and rhythmic bass. 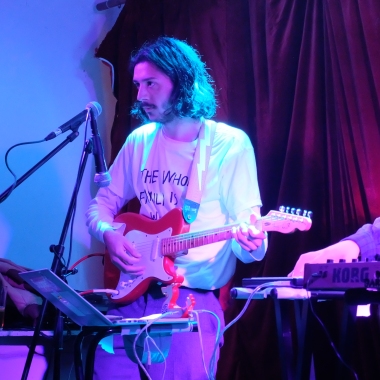 Back in June of this year the band released a six-track EP named ‘All My Friends Are Having Fun Without Me’ via bandcamp.

Opening the night was Svetlana Smith, a duo comprised of Zac and Anice. It was their first ever live show, apart from a house party they played a few days beforehand. They opened the proceedings with a haunting recipe of bittersweet synth-pop and were joined on stage for a song by Southend-on-Sea bedroom pop artist Ellie Bleach.