From Uppsala Sweden, Cat Princess released their debut EP Please Me in December 2016 before inking with Rama Lama Records (home to Steve Buscemi’s Dreamy Eyes, Melby, Delsbo Beach Club) and subsequently releasing a limited run of 100 copies to cassette. Please Me is a collection of five tracks that demonstrates the bands love of jangly guitar-play, disco-driven pop. The minimal electronics, playfully chaotic vocal delivery and 80’s Bowie guitar charge on tracks such as Take a Ride and Mr. Madagascar make Please Me an frightening proficient debut. 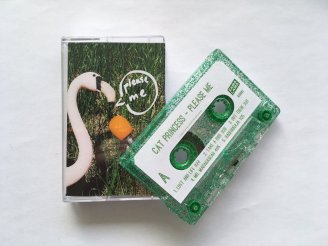 Enter Fly on The Wall, the natural progression and big-hitting left-field pop number to follow up such a debut. Complete with eccentric synthesizers and a touch of the off the wall pop genius of the late, great David Bowie, Cat Princess have created a incredibly intriguing anti-pop pop formula which makes Fly on The Wall an irresistible listen. This all killer-no filler approach to art-pop hasn’t been done this well since Franz Ferdinand came on so strong in 2002.

Fly on The Wall is accompanied by a hand drawn stop motion video created in-house by bassist Isabelle Friberg.