Brooklyn post-punk outfit BODEGA recently landed in the UK to play a string of shows to promote their upcoming debut record Endless Scroll due July 6th. Ben Hozie kindly took the time between two hyped London shows to give us a glimpse into what makes these five individuals BODEGA. 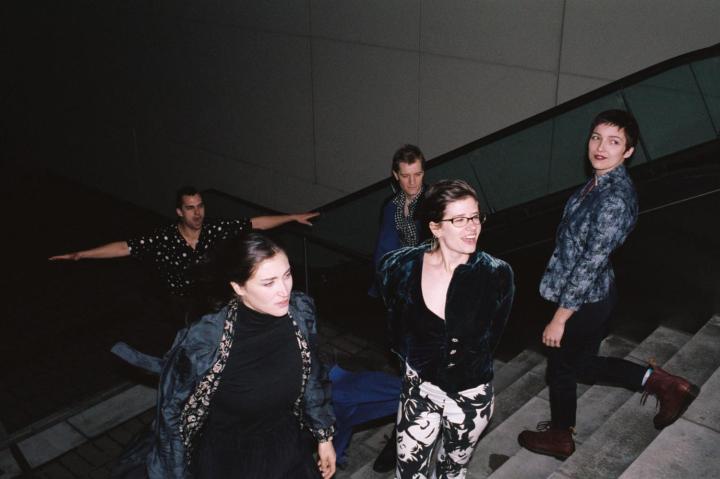 5 minutes with… Ben Hozie of BODEGA.

You’ve just released a thought-provoking video for your single ‘Jack In Titanic’, the track is a different beast to your previous releases, how did the idea for the video come about and how does the track sit within ‘Endless Scroll’?

“It’s the last song on side A of the record —> therefore one of the pillars of the ‘scroll’. The song became one of our staples when I realized it was a shapeshifter – a comedy, critical essay, and yearning ballad all at the same time – it all depends on the performance and/or the listener to decide on the mode. Nikki Belfiglio and our friend Corey Eisenberg made the sculptures you see in the video. The 1:1 square aspect ratio was chosen to mimic the dimensions of an LP record —> to make it like like you are looking around the edges of the frames of the ENDLESS SCROLL cover.”

Fast forward to the year 2043, 25 years into the future, you walk out of your apartment and walk down the street, what do you see?

“I assume we will be hallucinating the images of the street via VR or some new form of augmented reality.”

Outside of music, what is the biggest influence on BODEGA as a band?

You’re doing a run of shows in the UK, have you guys been influenced by music/ art or cultural movements from the UK?

If you could travel back in time to have a beer with one person who would it be and what would you ask?

“Nikki wants to ask Princess Diana how much the Royal Family hindered her philanthropical work. I would like to chat with Shakespeare —> hear about his writing process —> demystify/ humanize the genius.”

“Absolutely. The best part of being in a band is to meet and connect with new people.”

Your debut record ‘Endless Scroll’ drops in July, what do you want listeners to take away from it?

“The record is there to be used however anybody wants, it will no longer belong to us. I hope it inspires/ helps somebody to make their own art —> to put something where there once was no thing.”

Record Of The Week – ‘Binary Childhood’ by Otzeki.

4 thoughts on “5 minutes with… BODEGA”