Ahead of their London show with us at Paper Dress Vintage on February 15th, the Norwich duo took time out to discuss the DIY nature of their music, the making of their debut album and the importance of independent venues.

Gemma: “We’d previously played in a 5 piece band together, but as various members had other commitments it was hard to organise practises etc, plus we kept having to turn down gigs.

When one of the band left to go travelling Maria and I met up for a drink and she proposed that we started something new as a duo. We’d both dabbled in a bit of electronic music in the past and both enjoyed writing and producing on our computers at home, so electronic music was a no brainer really.

Right at the beginning I was originally on guitar and Maria played synth and stand up drums (just a floor tom and snare), but as we progressed we added more electronic elements which allowed us to be more varied with sounds. When you have hundreds of sounds at your finger tips that you can manipulate to your hearts content, that’s when it becomes fun to create!”

I see your album as a cohesive body of work. It flows well track to track. With stand alone singles, it’s sometimes hard to create a thread or feeling between songs or for a band to create an overall identity.  Were there specific ways you brought the record together track by track?

Maria: “We actually wrote most of the album quite quickly, like over 4 or 5 months I think, so it just came together quite naturally. I’ve always loved that 80s DIY scene that came out of New York and Chicago black and gay culture at the time, so that was very much in mind while writing and mixing the album. We’re both driven by bass and the groove, so we knew whatever we make needs to have that upfront.”

Am I right in saying that Sink Ya Teeth record at home? I imagine that enables you to obsess over each detail.

Gemma: “Yep, all from our spare rooms at home, often with our cat or dog on our laps! In fact the entire album was written, recorded, produced, released, designed ourselves (Maria designed the artwork and the photo is a selfie we shot in her flat!).

Basically everything but the mastering, which we got done in Norfolk to keep it all local. It was good in that it enabled us to hone our craft more – for me anyway it gave me time and space to listen to the tracks in different scenarios, on different speakers, in different moods, which you wouldn’t get if you were tied to say 2 weeks in a studio with a producer. I dunno if that’s a good thing or not but it’s what I needed at that time. However I’m not one to obsess over tiny details, although I probably should more. Not sure what Maria would say about if she does…. Maria?….”

Maria: “Can’t say I’m one to obsess over each detail either. It’s just easier recording at home coz you can do it in your pants…” 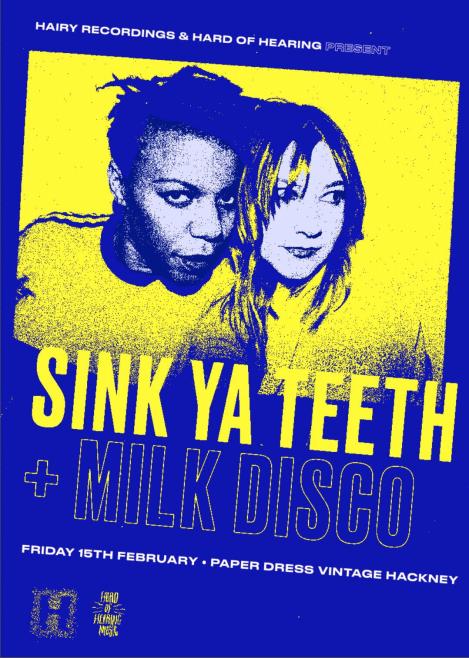 Were there specific lyrical themes you looked to get across through your full length record?

Maria: “Not really for this one, no. We did realise after writing it though that a lot of the songs were about friendships and human interactions with one another, but it wasn’t intentional.”

You’ve played with some incredible artists in the last year or so, Gang Of Four, Confidence Man, A Certain Ratio, !!! (Chk Chk Chk) and more. Any stand out moments, words of advice or stories about sharing a stage/ evening with these heavy hitters?

Gemma: “Supporting Moon Duo at XOYO stood out, cos when Maria and I had our first meeting to discuss forming a band, Moon Duo were one band we talked about as an influence being a duo. We also had some great bands support us at gigs – like Bradford based Flash Cassette – an awesome old school 80’s funk duo and Bricolotheque from London who made an immense dark, industrial noise.”

Maria: “The ACR (A Certain Ratio) crew are complete legends. Top, top people, with huge talent, and really supportive of up and coming bands too. Its always a real pleasure to share the stage with them, particularly in Manchester.”

In what way has the music scene in Norwich enabled you to experiment, cut your teeth and grow as Sink Ya Teeth and as musicians?

Gemma: “Norwich is a great place to be a musician, and over the years there have been great venues and great promoters all over the city that help you with your first gigs. But that one that stands out for both of us is the Norwich Arts Centre. I did my first ever gig there when I was 15 and they have been incredibly nurturing over the years. More recently with Sink Ya Teeth they’ve been super supportive and we’ll never take that for granted.”

Maria: “Yeah, Norwich Arts Centre is a special place. We’ve been going there for years to see bands. It’s got good mojo. And all our friends who are in bands play there too. It’s a supportive scene in Norwich, and some great artists are coming up like Vanity Fairy, Peach Club, Birds of Hell, Maya Law…”

Sink Ya Teeth always seem to be playing in Europe, where is the best place that you’ve played recently, and how have crowds reacted to your music abroad compared to the UK?

Gemma: “I gotta say the London Calling in Amsterdam was pretty cool! We played upstairs and everyone was dancing, which always helps us have a good time on stage! Harder for that to happen in the UK it seems. Although the small punkier gigs can be great for that!”

What do you have hidden up your sleeves for 2019?

12 thoughts on “IN DEEP WITH… SINK YA TEETH”