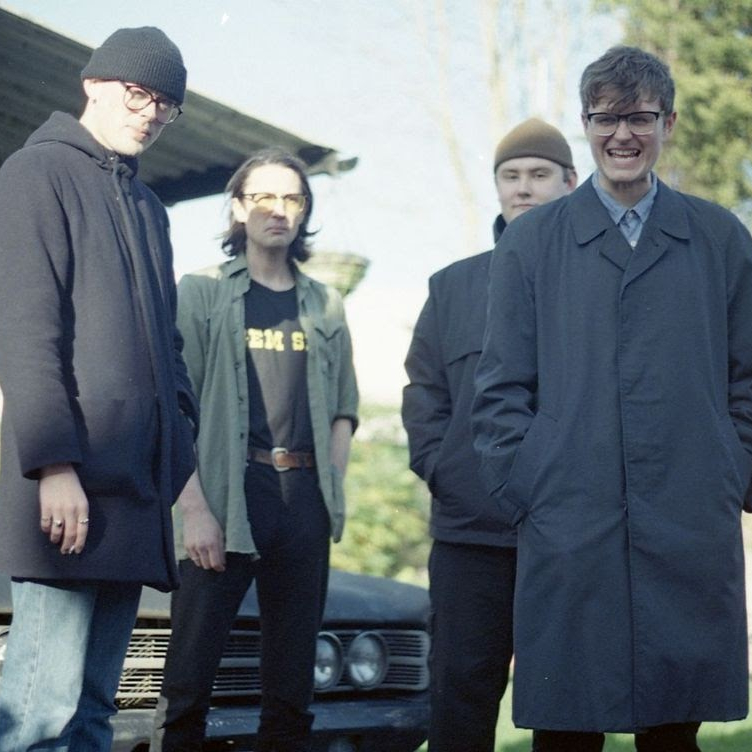 What makes one of Leeds’ liveliest new prospects tick?

Whether it was their debut single ‘The Trapper’s Pelts’, or more recent release ‘Fixer Upper’, Yard Act are on a roll – and you get the impression they’re just getting started. One listen to their latest effort shows a band, and a lyricist, able to portray an incredibly relatable picture of their surroundings. Yard Act’s unique social commentary snakes around the band’s angular grooves creating a sonic vision that is as danceable as it is topical. We got in touch with the Yorkshire newcomers to find out what makes the four-piece tick.

Hard Of Hearing: What first struck us through your music is the lyrics, how important are they aside from the instrumental output of the band?

Yard Act: “To me they’re important because I use writing to figure stuff out, my beliefs at that time, why others might feel the way they do… It’s great that people seem to really be into lyrics at the moment, in general, because for years that didn’t seem to be the case. It’s good for me, because I’ve got loads of rubbish in my head to get out and I think it’s VERY important people hear it.”

Hard Of Hearing: Your lyrics are incredibly poetic, I feel they could be released on their own as a social commentary of these times. Do you start with words when writing or just get in a room and play?

Yard Act: “It’s a bit of both, I’ve got a big file on my computer, notes on my phone and scraps of paper and a notebook I scribble in. Then I’ll tweak it so it fits with the music. I don’t really see them as poetry but I don’t mind if people think they are. There was a lot of elitism in poetry for a long time, and I’m glad that mentality seems to be fading. Maybe they’ll put me on the national curriculum one day. “What does the Graeme character personify?” – “A Nob head miss?” – “Correct, Graham”

Hard Of Hearing: You released your new single ‘Fixer Upper’ in July, what message were you looking to put forward with that release? Do you feel a responsibility to talk about society and the world you live in?

Yard Act: “That song is obviously having a dig at a certain type of person. I don’t really want to say I’m better than that person as if I’ve got all the answers, because I don’t, but I am. Though we’re all allowed to have different opinions, different beliefs and different ways of life (YOU CAN’T SAY ANYTHING THESE DAYS. Yes you can, and you do. Constantly. Shut the fuck up.) I just think it’s important that when people say and do stupid things through no fault but their own, you take the piss out of them. Knock ’em down a peg or two. But no, I don’t feel a responsibility to say things and nobody else should either, especially not just because you’re in a band.. That said, I do have quite a strong set of morals and it does inevitably spill out onto the page sometimes. I might beat myself up about being the best person I can be constantly, but it’s still not my place to tell anyone else how to live their life or what to believe. The one thing I wish everyone would really do is confront themselves more often. Question yourself at every turn.Don’t kid yourself that you’re doing the best you can and never believe your views (progressive as they might be, or maybe not…) are fully formed.”

Hard Of Hearing: You’re from Leeds, how has the history of that city informed Yard Act as a band?

Yard Act: “It’s a very beautiful part of the world to live in. Lots of greenery and scenery within walking distance. A great sense of community, particularly within the circles we move in, still reasonably cheap to rent and mostly decent, kind people. It’s a lovely place to call home and I’m glad I moved here what.. 12 years ago now. Bloody hell. DON’T ALL BE MOVING HERE FROM FUCKING LONDON NOW I’VE SAID ALL THAT.”

Hard Of Hearing: Do you have favourite artists at the moment who you feel are making steps to stretch the boundaries of new music? Or just bands you like..

Yard Act: “My friend Algernon Cornelius from Manchester is a huge inspiration to me. I feel like he’s really been hitting his stride over the last year or so. He pushes the boundaries of noise/ hiphop/ other and he really does jam econo. He’s also got excellent taste in music and most of what I like is just stuff he recommended to me 6 months earlier. More people should know who he is. So here ya go – https://algernoncornelius.bandcamp.com/ “

Hard Of Hearing: What does the landscape look like for new artists nowadays in terms of the industry, sustainability as a band and pushing forward with your art?

Yard Act: “I don’t get too bogged down in thinking about it to be honest. If you’re talking about financial stability, it’s very uncertain.. I’ve never managed to make enough money from being in a band to quit my jobs, but I’ve never stopped creating and writing. Once I realised I wasn’t going to stop, I realised how very sustainable it was in a creative and therapeutic sense. People will always find a way to create and that’s what matters most, more stuff. I truly believe everyone can make great art and I’d rather nurture and sustain the ideology that every single person can and should have a go. I’d rather that than get wrapped up in how to make money from it as if I’m owed a living more than anyone else. In the same breath, I’m not adverse to making decent money as a musician. In fact, I think I’d quite like to earn all the money. Til there’s none left for anyone else!”

Hard Of Hearing: Lyrically do you find influence in tumultuous times? Or would Yard Act exist similarly at a point in the past or future?

Yard Act: “Ryan showed me that BBC 4 documentary where E from Eels looks at his dad Hugh Everett’s multiverse theory a few weeks back. It’s comforting to know that there are infinite Yard Acts out there reacting to and engaging with their surroundings, but you’d have to ask one of the other Yard Acts that question, I can’t answer it… sorry”

Hard Of Hearing: Who’s in your band and what do they play?

Bristol’s LICE soundtrack our distopian-esque present on their debut LP.

Don’t Worry conjure up an indie rock gem in new single ‘As If By Magic’.

Home Counties are all fired up on post-funk new single ‘Modern Yuppies’.